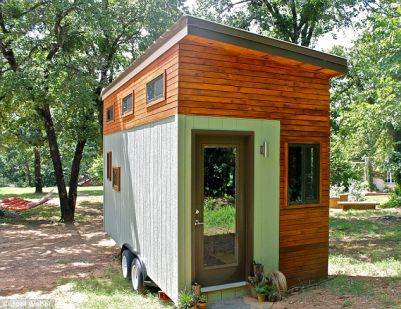 Students planning to live off-campus at UT Austin are familiar with high rent prices for less-than-stellar apartments and signing leases a year in advance. Even with all the construction you see around Austin, rent prices continue to rise. In 2005 the average rent per month was $709. In 2010 it jumped to $816. Then just in the first quarter this year, it reached an average $1,092 a month to rent an apartment in Austin.
Joel Weber who plans to attend his junior year at UT this fall said he’s determined to incur less college debt by living in the miniature, 145-square-foot home he built. With a plan to save himself from further debt, the 25-year-old said it was summer 2014 when he decided that he would build his own home, rather than stressing over higher costs for an apartment, or on-campus dormitories.
The dwelling, Weber said, took one year to complete and cost an estimated $20,000. Built on an 18-foot flatbed trailer, the space has two lofts, working plumbing, electric, a shower, a propane-powered stove, and a sink Weber crafted from a mango bowl according to ABC News. The aspiring student, who works doing landscaping, house-sitting and as a nanny, said the small house inspires him to be active and fits his lifestyle because ‘it allows me to be on the move’. He added: ‘I may live in it forever and I’m cool with that, 145 square feet might not be for everybody, and that’s OK. ‘It’s more about how I can live simple and still be grateful.’
At Sterling Custom Homes, we admire innovators like Joel Weber. Congratulations Joel! Keep up the good work!
Sterling Custom Homes has been building the highest quality Austin luxury homes since 1989. We are a full-service custom homebuilder eager to assist you with your lot analysis, home design and construction.