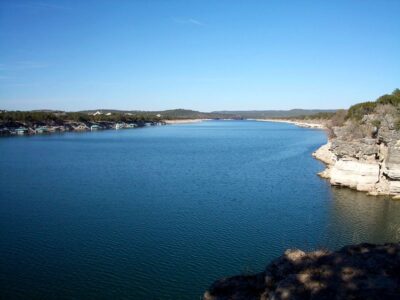 For 25 years, Sterling Custom homes has been the premier custom builder in Lakeway Texas. We have built over 200 unique custom homes in this beautiful lakefront community. We love this vibrant community and have been blessed to have built many custom homes on Lake Travis.

The current drought has been difficult for our lakefront property owners. Lake Travis, at 633 msl, is about 45 feet below full. Residents are now all too familiar with the islands that have been revealed by the low lake levels. The land that is now visible in the main basin near Mansfield Dam is appropriately named “Sometimes Islands”.

Due to a couple nice rain events in September, Lakeway residents had hoped that lake levels would improve much more than they have. The talk of an upcoming El Nino weather pattern was also encouraging. Here’s what the LCRA had to say about the recent precipitation and the chances for more rain in the near future:

“Rainfall was above normal across the Hill Country and Central Texas regions in September. Much of the rain came in two separate events in the middle and latter parts of the month. The basin’s soils dried out between storms, and much of the rainfall soaked into the parched ground. Monthly rainfall was generally between 3 and 4 inches, but a few spots across the northern Hill Country and the coastal plains region received more than 10 inches.

With the Pacific Ocean warming throughout the summer, National Weather Service forecasters had been predicting that a weak El Niño would develop and persist through the winter. El Niños typically cause above normal rainfall across Texas during the fall and winter.

Confident that the lake levels will return to normal eventually, this may very well be the perfect time to build a Sterling custom home on area lakefront property.